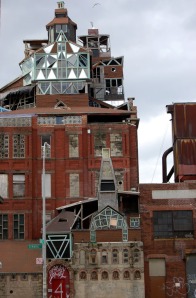 Artist Arthur Wood has lived in his house for thirty-four years, using discarded material he found in dumps to transform it into a unique and legendary space known as the Broken Angel.  If you rent the film Dave Chappelle’s Block Party, you can see the fruits of his labors. If you live in the Clinton Hill neighborhood of Brooklyn, you’ve probably met Arthur.  If you walk down the block where Quincy dead-ends into Downing, you cannot miss the Broken Angel.

Arthur Wood purchased the 4-story brick tenement building at 4-8 Downing Street in 1979 for $2,000. He lived in the house with his wife Cynthia and raised their son Christopher who is now a stone carver. The artist explored ideas about design and vernacular architecture with improvised construction to add new floors and rooms to the original building, to the point where the structure reaches 104 feet, or about 9 stories above the sidewalk. The site has been compared to Watts Towers in Los Angeles for the ad hoc construction and is acknowledged for its value as folk art and as part of the cultural heritage.

This beautiful artistic landmark has inspired many people with its intricate arches, stunning, gravity defying angles and it’s sheer asymmetry in a landscape which is all too dull and predictable. Much of the material it was built from was sourced from the garbage and dumps of NYC, showing the truth in the old maxim; “One Man’s Garbage is Another Man’s Treasure.”

Arthur is being evicted this week after a long legal battle to stay in his home.  Tomorrow (on the Ides of March) a pair of benefits for Arthur are taking place.  The first is an all-ages afternoon block party at the Broken Angel. The second, an after party, is a dance party fundraiser (21 and over) at the Irondale Center.  Details on both events may be found at this Facebook page.