At Pratt, we are fine-tuning our social media, and one of the results of that effort is the new, updated Sustainability Studies minor page. Pratt undergraduates curious about their options in the 15-credit minor can see which courses are required, what electives are offered, and follow links to those courses’ links in the schedule.

The department is likely to expand the list of elective offerings for the minor in the future, and this page is an excellent resource for students curious about the program. If you are interested in the program or its courses, feel free to ask me questions. 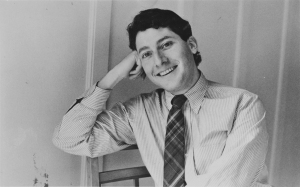 Andrew Patner’s author photo for the I.F. Stone biography. Taken about six years after his teaching stint at KAM.

Andrew Patner, who died yesterday after a brief illness, spent decades as a critic, radio host, and author in our home city of Chicago. His death is hitting the city’s arts community hard, as it should. He’s spent decades discussing classical music, jazz, and literature there, and his perspective will be greatly missed.

My experience of Andrew is as a reader, but also as a student.  The year before my Bar Mitzvah, Andrew attempted to herd the cats that were the 12-year-olds at Hyde Park’s KAM Isaiah Israel. Andrew exhibited unending patience with us before moving on to complete his education and begin his career.

My family moved to California the year after my Bar Mitzvah, but I’d occasionally cross paths with Andrew. I read his biography of I.F. Stone with interest when it came out in 1988, saw him at a memorial service for deceased University of Chicago professor Hans Zeisel a few years later, and, when I returned to Chicago, regularly read his work. (Which was easy, as Andrew was prolific.)

About five years ago, shortly after I began teaching at Roosevelt University, I went to the Spertus Institute to see Lee Shai Weissbach discuss his history of small-town Jews. Andrew and his mother Irene were in attendance, so we caught up. My book on the scrap recycling industry had come up in the discussion, and it interested Andrew. He related his family connection to the trade as a cousin of Michigan’s famed Padnos family (whose archival materials had been among the sources I used in my dissertation), and we chatted about the legacy of American Jews in the scrap trade.

His connection to the scrap trade should not have been a surprise; Andrew seemed to have connections everywhere. He was also a friend of Studs Terkel, and when I heard the sad news yesterday, I spent an hour listening to the two polymaths discuss everything from the University of Chicago Law School to Mahalia Jackson. The conversation represented the best of what I remember about Hyde Park, and it’s a good way to remember him.