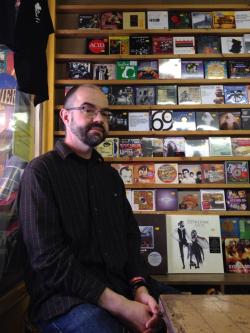 August 16th, Sound Cat Records will be changing its name to Juke Records, under the new ownership of Jeff Gallagher. Jeff has been a customer at 4526 Liberty Ave. going back to the Jim’s Records days, through Paul’s CDs and Sound Cat, and he says that he “intends to honor the tradition and historical quality of the store offerings”. Plus, Jason and Bob, who most of you have gotten to know well through their years of working for Sound Cat and Paul’s will be staying on. So, you can count on Juke Records to be your stop for cool and interesting new and used records and CDs, and Jeff is going to work on expanding the stock even further. As for me, Karl, it’s bittersweet for me to sell the store, as I’ve been at the store for 27 years, working for Jim and Paul and owning Sound Cat for almost five years. But I’ve gotten to spend my adult life around other great people who love music, and for that, I’ll always be thankful. Anyway, Sound Cat will be open until Sunday, August 14th, the store will be closed for the transition on August 15th and Juke Records will open on Tuesday, August 16th. Here’s hoping you can stop in before next weekend to say goodbye to Sound Cat and then stop in after August 16th to welcome Juke Records!

I said this is the best record store in Pittsburgh. It is not the largest, but it is the best. It is the best because the people who work there provide a deeply thought out selection of rock, punk, experimental, jazz, country, folk, and related records that rival the best stores in San Francisco, Chicago, and New York. (Believe me. I have spent more money than I care to disclose buying music in all of those cities.) The symbiotic relationship between the store and WRCT over the years brought so much good music to so many people. I will be forever grateful for all that I learned because of that relationship.

Sound Cat is the best in no small measure due to Karl’s labors and subsequent ownership. Karl has been at the center of the best music in Pittsburgh for over a quarter of a century, both as a performer and (if you will) a curator of this immaculately selected catalog. I can’t thank him enough, and I will close this note with a device blatantly stolen from Nick Hornby in his book about a similar store. Thank you, Karl, for everything.

Click on the links and let Karl have the last word.

8. “Underdog Park.”
As perfectly constructed as rock songs get.

7. “Naked and High on Drugs.”
How does one live when your mid-twenties approach? From 1996.

6. “The Ballad of Bill Lee.”
It’s baseball season now and this is a great example of Karl’s forays into longer, more improvised guitar lines.

5. “The Official Shape of Beauty.”
Conversely, one of Karl’s most concise short songs.

3. “Nogales By Tuesday.”
A staple of road mixes and a certain kind of optimism.

2. “The World Says.”
I will always be grateful for this song. From the summer of 2007, around when I visited the Fred Hutchison Cancer Research Center as a caregiver.